You simply cannot deny the array of sounds that’s coming out of Manchester. Whether it’s from artists who currently reside in the city or those who are originally from there. Nevertheless, the scene is doing bits! Zz The Slept On is originally from Coventry, he moved to Birmingham at just eight-years-old. When he was eighteen he finally moved to Manchester, which is where he currently resides. This 23-year-old emcee remains that underground wordsmith from Manchester-based label Roots Raddix, whose chill flow deserves recognition. In a rare interview with Inthewritersmind, he shares the origins behind his name, when he started writing, what it’s been like working alongside talented individuals such as IAMDDB, Woddy Green, LayFullStop and more…

Why Zz The Slept On? What’s the inspiration behind the name?

Zz The Slept On is the highest point of personas I’ve had musically. When I started going to the studio properly and releasing music around 2009, my rap name was Rob Trikzz. Halfway through my uni years it changed to Nitalian Sleazz, because I’m Nigerian and Italian. Then finally I changed it to Zz The Slept On. It’s always been ‘Zz’ though. ‘The Slept On’ is a reflection of my musical talent, not being fully considered as a heavyweight with lyrics. This name feels right.

When did you start playing with words?

I first started writing music when I was nine. I grew up around music, genres such as reggae, blues, hip hop and rnb. I think it was after I listened to The Eminem Show, that I actually started writing properly. I used to write books. I was always good at English language, so it helped. I did my first show when I was in year five.

Wow, that’s quite a young age! How did you get noticed and when did you get signed to Roots Raddix?

I went to visit my older brother at uni when I was eighteen. T was looking for new artists. My brother was already friends with him, so he brought me through to his halls. I spat a verse and we worked well from the jump. I recorded the verse and then got signed to the label. Since then we recorded loads and still do.

What do you love most about the label and why do you feel like it’s a good fit for you?

What I love most about the label is the vibe we bring. There isn’t anyone else in this city or country that I think sounds like us. LayFullStop has a powerful singing voice and rap bars. Woddy has a unique flow and distinct bars. I have my own style of being able to describe a story in my lyrics, as well as being able to work on collaborations which fit the other artist’s vibe. I will always rap about things I actually do or have done, rather than make up stuff for clout.

I think we can all agree that Roots Raddix, despite still being on the come-up is in it’s own lane. So, what do you hope to bring to the hip hop scene as an artist?

What I hope to bring to hip hop is a style and verbal expression that sounds like none other. Realistically, I’ve never been told I sound like anyone else. So, I think I’m doing something right aha. Next step is releasing more music!

Yes, would definitely like to see some more tunes from you. It would be quite interesting to see what direction your music takes in the future. Which artists both in Manchester, the U.K. and abroad do you look up to? What do you like about their style?

The artists I respect the most are the ones who I surround myself with, so mostly Roots Raddix. I don’t really hang out with other rappers, because of the different energy. At the moment I like Blue Room Mafia, a hip hop and grime collective from Birmingham. They’re making sick moves for that scene. Another collective from Birmingham that I also respect is TRPHSE. Phundo Art, who is also from Birmingham is another strong rapper that I like with a different style. There’s a collective from Manchester called SURCO that I also respect, that’s a group of DJ’s and they’re sick! KS Roosevelt is a younger artist from Manchester who’s just starting to get noticed now. His singing is dope. The overseas rappers that I listen to mostly are Earl Sweatshirt, MF Doom and DXCT. There’s definitely a lot of other underground heads that I listen to also.

I get that! Earl Sweatshirt and MF Doom go hard. You’ve put me onto a couple new underground heads now, which is great! As you are still coming up in the industry, can you give us any clues as to who you’ll be collaborating with in the future?

I’m definitely still up and coming. I’m currently working on a track with a producer from Germany and I’m making a four-track EP with a producer from Poland. In terms of doing this, I’ve been writing for thirteen years and I still find new inspiration regularly. I feel like a lot of artists just release loads of music. However, they don’t actually take time to find themselves, all their stuff sounds the same. I don’t like to rush things, so I take my time. Even if people consider it as lazy, I still do other things outside music.

It’s great to see artist join forces on a track. I actually first heard you rap on The March ft IAMDDB. What was that collaboration like? How did it come about?

The March was soon after D was working with us on the label. I think I just recorded my verses on a beat T showed me and then D did the intro. I don’t think I was in the studio at the time. She’s a fantastic singer though!

I think because I’m on a Manchester-based label people confuse Raddix for being from Manchester. Though, none of us are actually from here aha. This is why we don’t sound like Manchester artists, but the scene here is pretty sick. It has helped to push us all. The elevation of talent here is definitely noticeable. I see a lot of artists grinding from this city. It’s good for everyone as a whole to be heard. I think after we drop a Roots Raddix mixtape people will know we mean business.

You dropped Flex this year, a combination of chill vibes and wordplay. What do you want people to take away from the track and expect from you in the future?

With Flex I wanted people to watch the video, then watch it again and actually listen to everything I say in the track. I feel like it’s some of the best lyrics I’ve ever written. It’s also a really laid back vibe, so I’ve had a lot of good feedback from it. When I write I make sure it sounds good acapella first. If you’re an artist who needs a beat to sound good, you’re not doing it right. I’m producing as well, so a whole new sound is coming. 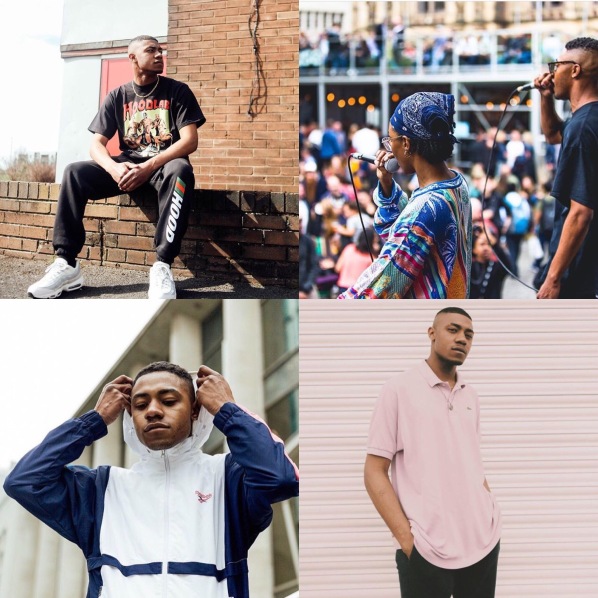 STAY IN TOUCH WITH Zz THE SLEPT ON